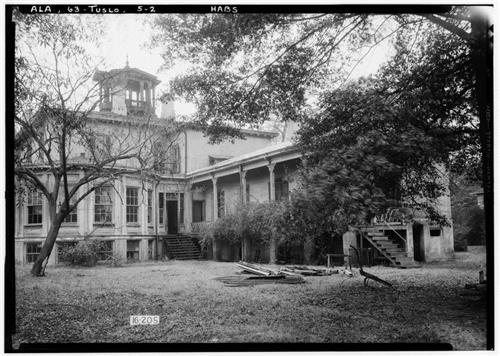 Built between 1859 and 1862, the Jemison-Van de Graaff Mansion was originally used as a town house for Senator Robert Jemison Jr. It later served as the town library and has since been acquired by the Tuscaloosa County Preservation Society and the Heritage Commission of Tuscaloosa which are working to restore the historic building. The house is open to visitors free of charge, and can also be rented out as a reception of party hall. If you do host a gathering there you may, however, find that a few of the attendees are not on the guest list; visitors have reported feeling cold spots and strange presences when inside.

Some believe the unusual feelings are coming from the daughter of Jemison, Priscilla Cherokee, and her husband, Andrew Coleman Hangrove. Hangrove had apparently suffered from a persistent headache which hounded him after he survived a gunshot wound in the head; after suffering for years he shot himself in the home's library to finally be rid of the pain. Distraught, Priscilla fell into a deep depression and she too died eight years later. It is also worth nothing that Rober Jemison himself died in the mansion on October 16, 1871.