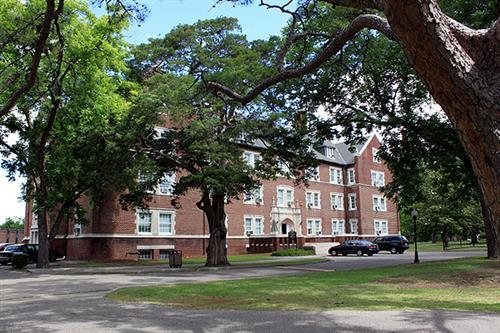 The Red Lady of Huntingdon is said to be a the spirit of a girl named Martha who committed suicide on campus when Huntingdon was still the Woman's College of Alabama in the early 20th century. Martha was very fond of the color red, constantly dressing in it and decorating her room with a red rug and red bedspread, but she was not very fond of her stay at the college. She had few if any friends on campus, and her sullen demeanor only distances her further from the other students. One day her roommate, the one person Martha evidently felt a connection to, decided to move out, leaving her angry and bitter over the loss of the closest person she had to a friend.

After her old roommate moved out nobody saw Martha on campus, she did not attend class nor did she come out for any meals. Worried, the roommate returned to Martha's room on the fourth floor of Pratt Hall; she opened the door to find Martha dressed in her red robe, lying on her red bedspread, soaked in blood. Martha had killed herself, but evidently she never left the campus. Her ghost has been repeatedly spotted by students, and a red light is said to glow from her room on the anniversary of her suicide, though the exact date is not known.