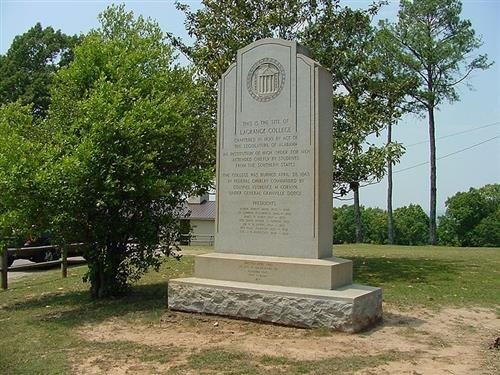 The University of North Alabama was originally founded as LaGrange College in 1830 and has undergone many changes in the time since. It was reestablished as a teachers college in 1872, and just one year later become one of the earliest coeducational institutes in the US. One of the school's buildings, the Robert M. Guillot University Center (also referred to as the GUC) is rumored to be haunted by the spirit of a woman long dead. Allegedly the woman hanged herself in the building when the school was still a teaching college, and now the sound of her body swaying back and forth can be heard on the second floor. Norton Auditorium is said to be haunted by the ghost of a construction worker named George, who fell from a scaffolding while working at the university and died.

Wesleyan Hall, which was built in 1856, has a haunted history dating back to the Civil War. At different points during the war, the building was occupied by both Confederate and Union forces, including Confederate General John Bell and the Union's General Sherman. At one point during the occupations the son of an officer, who had been traveling with his father a drummer boy, drowned in a nearby lake; conflicting accounts claim that he either simply fell in and drowned or that he had been kidnapped for ransom, then tossed in by his captors. Whatever the case, the boy's spirit has been seen wandering the halls of Wesleyan Hall ever since. Some have seen his spirit late at night, while others have heard footsteps and the sound of rhythmic banging.

Locals have also reported seeing the spirit of a young girl looking down from the upstairs window of the Off Campus Book Store. The girl, named Molly, allegedly lived in the building during the 1930s or '40s, but died of rabies shortly after being bit by her puppy.